Report: Sharp Has RN Turnover Crisis And Financial Capacity To Fix It

August 27, 2019—This morning, delegations of nurses across Sharp delivered copies of an eight-page report detailing the persistent nursing turnover at Sharp. The report, written by AFSCME Labor Economist Gary Storrs, is based on analysis of recent financial and employment data.

“In the past two completed fiscal years, Sharp performed remarkably well and had enormous reserves, much larger than a common benchmark.”
—REPORT: SHARP HEALTHCARE HAS A NURSING TURNOVER CRISIS, DESPITE THE FINANCIAL CAPACITY TO FIX IT 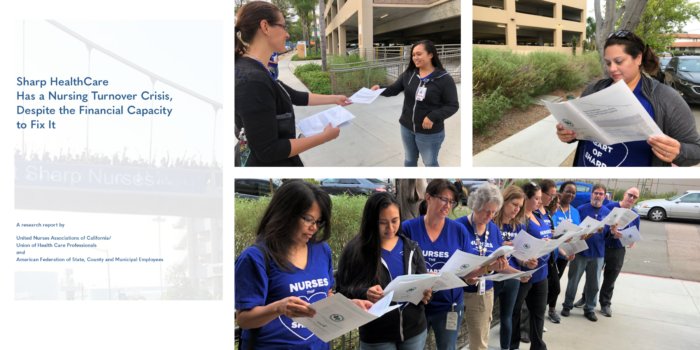 “Despite its financial success, Sharp appears to have wasted money by failing to retain and attract sufficient nursing staff. This failure is inextricably linked to inadequate wages and benefits. The nursing turnover percentage has manifested in double-digits for several years.”
—REPORT: SHARP HEALTHCARE HAS A NURSING TURNOVER CRISIS, DESPITE THE FINANCIAL CAPACITY TO FIX IT

Click here for a PDF version of the full report.