Written and Published by KP.org 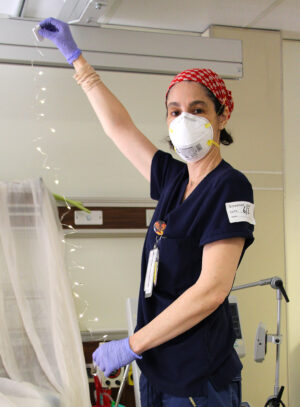 When Michele Schonbrunn, a Kaiser Permanente West Los Angeles ICU nurse, heard about a patient who was unable to physically attend his son’s wedding, she did everything she could to ensure he was connected to his family and part of the celebration.

With the use of technology, the wedding was virtually streamed on a laptop by the patient’s bedside. Schonbrunn also spoke with the patient’s family over the phone to help with the proper customs that traditionally take place for a Jewish wedding.

Schonbrunn, who was raised as an orthodox Jew, even went as far as transforming the patient’s hospital room so it would be appropriately decorated for the occasion. She did this by improvising a chuppah, a canopy beneath which the Jewish marriage ceremonies are performed. To decorate the chuppah and room, Schonbrunn brought items from home, such as fairy lights, tulle and artificial flowers that she had stored from her own son’s wedding a few weeks prior.

Schonbrunn also dressed the patient, ensuring his attire was suitable for his role as the father in a traditional Jewish wedding. This included wearing a prayer shawl and a tefillin, a set of small black leather boxes containing scrolls of parchment inscribed with verses from the Torah. She added a bow tie as the finishing detail. 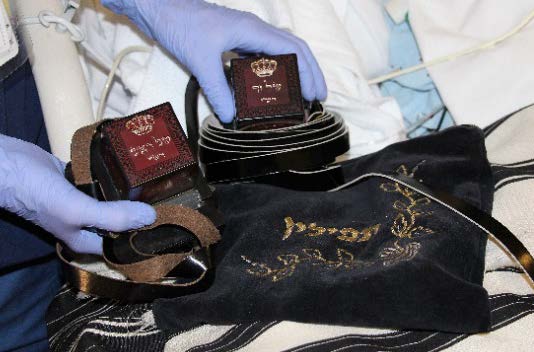 “Caring for patients is what we do, and this was a great opportunity for me to care for a patient in another way,” said Schonbrunn.

She mentioned that providing human touch on such a momentous occasion for the patient’s family was one of the most fulfilling engagements she has ever had during her time at Kaiser Permanente.

“In some small way I felt I was able to bring a measure of dignity and comfort to this patient and his family during a time of chaos and uncertainty, sadness and separation,” said Schonbrunn.

“Through technology and some creativity, we managed to bring the entire family together in a way that would have otherwise been impossible, acknowledge tradition in a time when things are anything but traditional and to hopefully provide an indelible and special memory of the celebration.”

2020 is a special year for KP and our nurses. KP is celebrating its 75th anniversary, and the WHO has designated 2020 as the Year of the Nurse in honor of the 200th anniversary of Florence Nightingale’s birth. It’s a time to celebrate our legacy of nursing excellence, and note that as our nurses contribute to Kaiser Permanente’s bold transformation of care for our members – one went beyond all expectations to preserve a sacred tradition for a single patient.